The Paris Rental team won't rest until you are satisfied,
and always with a smile! 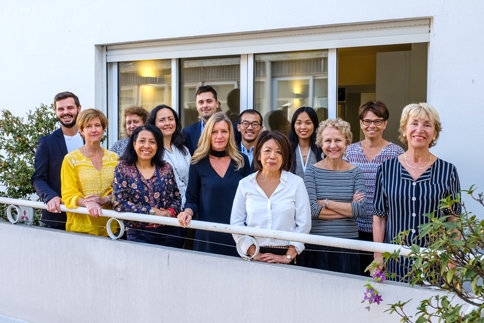 The Paris Rental team takes special care in responding quickly to its customers, whether by phone, e-mail contact or social networks. All Paris Rental’s home experts are English spoken, as well as French, Spanish, Italian, German, Laotian and Chinese spoken, so clients from the world over can be helped in the language that is comfortable for them.

With 32 years of experience, and a perfect knowledge of Paris and of its districts’ characteristics, we are sure to find the furnished apartment that will suit the requirements of our clientele! Paris Rental’s services include the organisation of electricity and gas subscriptions, the organization of internet’s installation, the home insurance subscription and, if applicable, the liaison with international schools partners for your children’s registration.

Claire de Circourt is President and Founder of Paris Rental / De Circourt Associates, a company she created upon returning from the United States, where she worked for fifteen years.

At eighteen, she decided to go to the United States to learn English and was attracted by its magnitude in size and global impact.

She first settled in Winston Salem, North Carolina, and studied at Wake Forest University and Salem College while opening her first business. At 22, she began selling "Christine Valmy" beauty products. Very soon, she had her university teachers, co-students, nurses of the hospital where her husband practiced, and word-of-mouth referrals as clients. She developed a multi-state reputation and sales territory.

Intrigued by her success, the New York-based skin-care company contacted her. That phone call led to a new opportunity. "Christine Valmy & co" entrusted her with the development of its franchises across the United States. When asked, Claire confided her "secret to success" to these new franchisees: a genuine interest in her customers and, of course, lots of work!

Aspiring to a less nomadic life, Claire de Circourt sought a new challenge in New York and joined "Feathered Nests," a company renting furnished apartments to American business executives moving to New York, and to expats. She was able to get her Real Estate License in exchange for four hours of unpaid work a day for two months. Meanwhile, she brought in many French businesses for the company by taking the initiative to contact French institutions like companies, banks, embassies, and more. Her following two-years experience in that company was the beginning of a great adventure.

Back in France, she founded De Circourt Associates in 1987 with her sister Anne. This company offered a service, renting furnished apartments to global expatriates on assignment in France. Using the experience gained in New York and working alongside a multilingual team, Claire created the international setting she loved.

This self-taught entrepreneur soon responded to a strong demand thanks to globalization and France's rapid economic growth. So far, more than 500 world-renowned companies have been patrons, half of them for over two decades.

Since then, thanks to hard work, her team members' talents, and the trust of her clients, landlords, and tenants, ParisRental - De Circourt Associates remains the gold standard in the field of high-quality furnished apartments in Paris.

Using top-notch service and new technologies, ParisRental aims to provide customers worldwide with a stress-free opportunity to find their new home in Paris.

Yoga, walking in the nature, music, and dance , spending time with my daughter, martial arts